Yes we are still working on the Boccie Ball court area and even built a very cool score board. Clayton built it last weekend the colored balls are wooden beads and you just slide them across the bar they are on. It works great! And adds a bit a color out there.
. 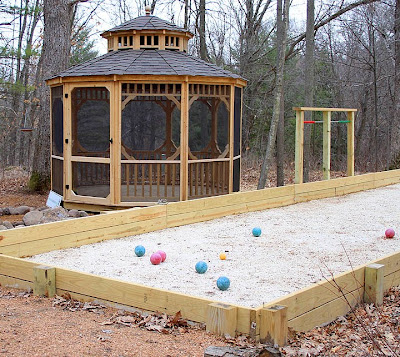 The second picture is the beginning of our landscaping around the gazebo area. I photoshopped the benches and plants in so it looks more colorful and you can imagine another seating area other than inside the gazebo itself. (we need to buy some patio and gazebo furniture soon) All those rocks came from the property. Clayton went out with the ATV and trailer and hauled them all over. I'll be planting a lot of impatiens on either side of the gazebo door and in pots around like I have them here. I will also put some daffodils around all the rocks too outside the walkways. And then some hasta's up against the court walls. It's really going to be a nice place to unwind, or read or nap once we are done. 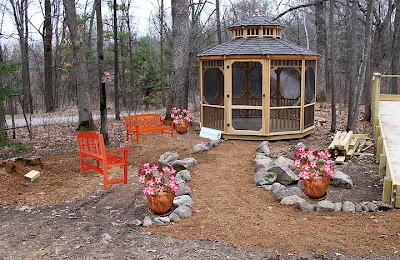 We've got something else planned for out here as well, (besides a deck on the other side of the court, that is in outline stages right now......but the other idea we have will be a surprise for later blogs.

We got sore working today, we just got out of the Jacuzzi tub; man that always makes us feel better.
Posted by Laura at 5:21 PM 4 comments:

Today I was looking out the window and saw the first butterfly of the season. So I ran with my camera and took it's picture. Then when I opened it in photoshop and zoomed in, I noticed something, it was a tongue! I search the Internet to see what came up and yes indeed, Butterflies do have tongues. It is very interesting and something most people would never see unless magnified or zoomed in. This butterfly seemed to be trying to drink off the blade of grass, however I am not sure how much moisture was there as snow has been melted and no rain for at least two weeks...maybe I should get the hose out and water my brown lawn.....
. 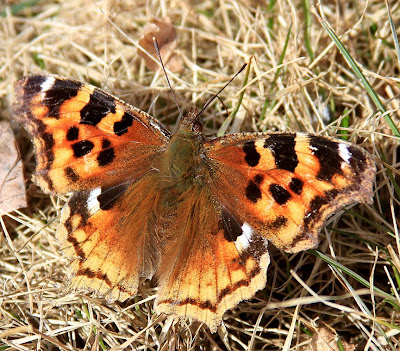 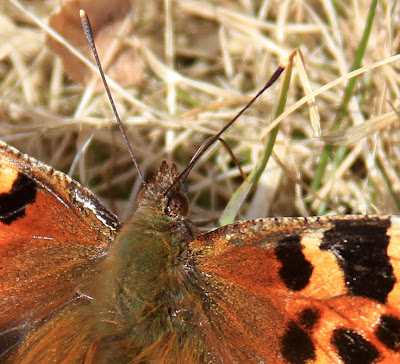 Did you know...
...that butterflies don't have mouths that allow them to bite or chew?
They, along with most moths have a long straw like structure called a proboscis which they use to drink nectar and juices. When not in use, the proboscis remains coiled like a garden hose.
Some moths, like the Luna moth don't have a proboscis. Their adult lifespan is very short, and they do not eat. They simply seek a mate, reproduce, then die.
The Asian Vampire moth pierces the skin with its strong, sharp proboscis and drinks the blood of animals.
Did you know...
...that butterflies taste with their feet?
Their taste sensors are located in the feet, and by standing on their food, they can taste it!
All butterflies have six legs and feet. In some species such as the monarch, the front pair of legs remains tucked up under the body most of the time, and are difficult to see. 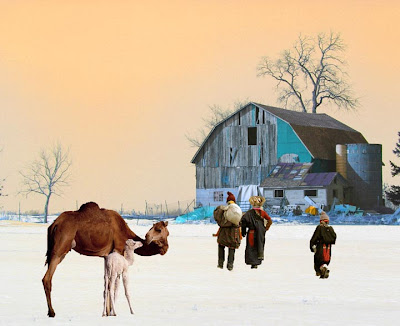 Ok, so here is one of my barn images...transformed into a Bedouin tent-ish type image. I am not sure what possessed me to do this, but I think it was the fact that the snow looked more like sand to me and then it went on from there. Anyhow, I sort of like my transformation...Clayton likes the origainl image better...which is below.
. 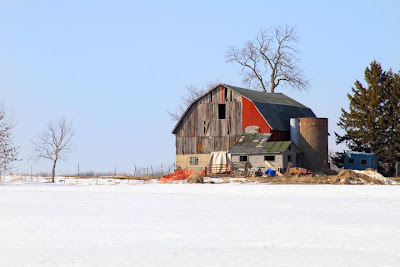 First project of the year has been built. Several weeks ago we had bought several seed starting green houses, and I had bought a box of a gazillion impatiens seeds. So today Clayton built the Grow Light Apparatus to hang the light on and the shelf the containers. We have it set up down in the basement in my workout room, maybe I'll use the exercise bike more now that I have some plants to look at :-) It was a nice quick easy project and I sort of even like it enough to move it outside after it warms up enough, I can keep potted plants on it and hang a few on it. Clayton got several vegetable seeds, which he will start soon. Mine will all be impatiens flowers!
.
Notice how nice it fits inside the window, and doesn't really hide the view outside. Look hardly any more snow...well at least on this view. Still got couple more weeks of snow melt before all ground if visible.
. 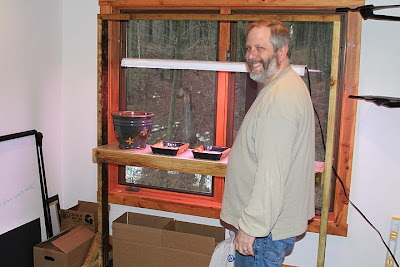 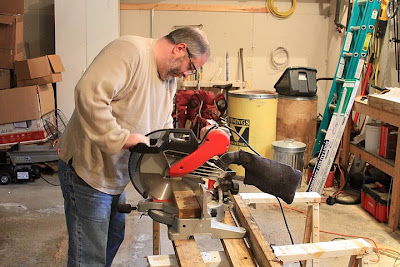 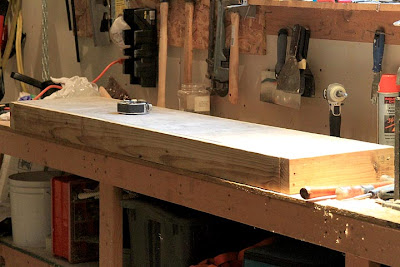 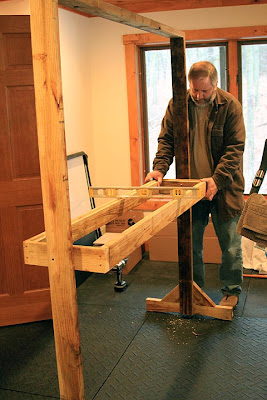 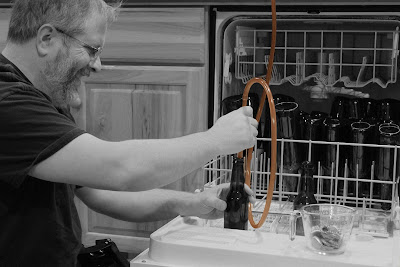 It's been two weeks since we brewed the wort; and so today; we bottled it. With 5 gallons of beer, you get 2 cases of beer. In the pictures here, we used a box of 20 ounce bottles so that is why it looks like only a case in a half. We tasted it again, and it's pretty darn good. It will be interesting to notice the difference being cold and carbonated makes them. We will have to wait now for two weeks before we can pop one open to find out.
Our other batch, which was an Octoberfest is still fermenting; that has about two more weeks to ferment though, so we will bottle those while popping open the Red Ale to taste. Now I get to start the creation of our own personalized beer bottle labels.......Cheers! 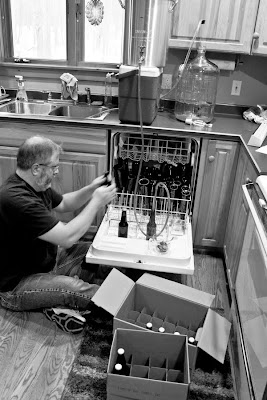 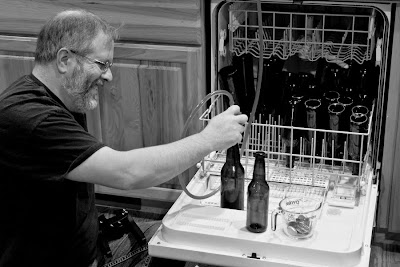 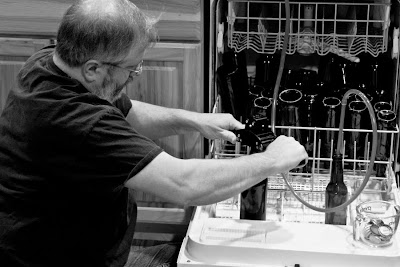 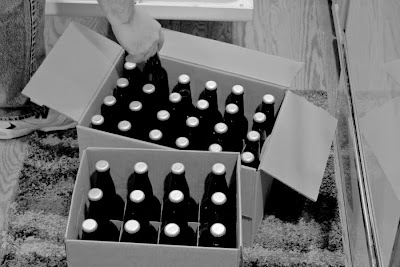 In case your wondering why I did these in Black and White; I did it mainly because the fluorescent lights made a really bad yellowish orange cast on them and I didn't like that and I couldn't correct it to my liking. Also well I like the first picture where the beer coming down the tube is in color, while everything else is not.

daffodils in Wisconsin? I don't think so

Not Yet anyhow! I received a couple pictures of the front yard where I used to live in San Jose, California; and then I took one this morning of our front yard in Wisconson. Well makes me wish I had planted 100's of daffodils last year so I had something to look forward to once the snow melts. But I did not. Maybe this year I'll plant some...the snow will be melted soon and then yard work will be plentyful.
. 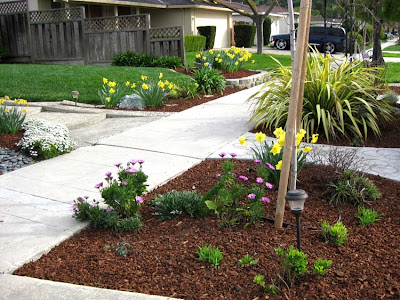 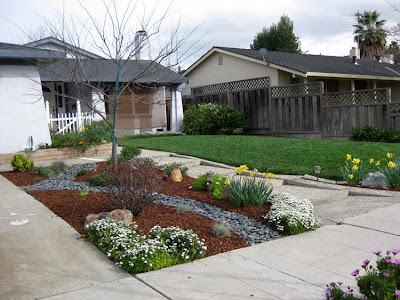 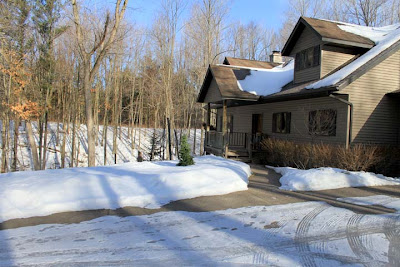