I'm involved now with a group of photographers who are going out and photographing all the barns in Portage County. I only agreed to do this because I love taking pictures of almost anything. And Hey I like a nice looking barn just as well. I mean I've already taken a few just while out and about since I've been here. However since I've started I've been talking with a few other people also involved who know just a little bit more about barns, styles, histories, how they were made, differences in the ones built 100 - 150 years ago to 50 years ago...etc. WOW I never knew there are so many interesting features. I'll share some of the differences in features as I learn more, but today I just wanted to post a couple that I like and this one just so happens to have cows in front. The last two are actually built on stone boulders as their foundation. 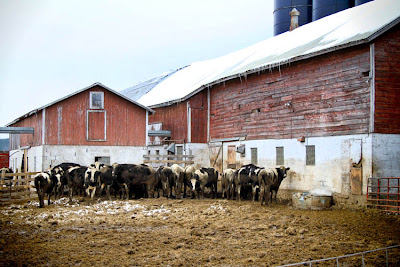 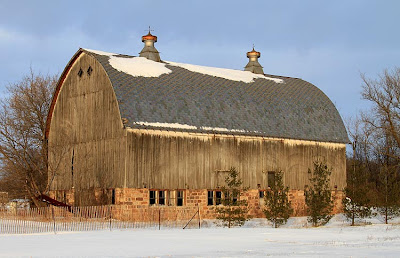 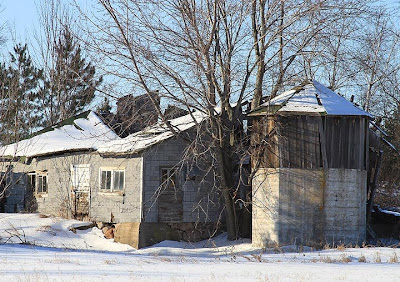 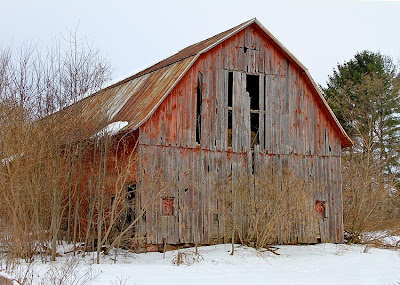 We all caught fish. There was six of us total. They had all the supplies we needed, we didn't have to bring anything and man what fun it was. We didn't use poles, we had twelve tip up’s didn't know what they were or that they existed till Saturday. When the flag stands up; it means you got a fish on the line. We went to two lakes, first lake we fished for Northern Pike. Only kept one, it was caught by the first couple who had gotten up early and set up everything for us. It was 25 inches. We all caught at least two or more, but the Northern Pikes if they weren't 25 inches or more we put them back down the hole. Clayton caught one 24 inches and he was put back.

Then we went and had lunch; pizza at a bar on the second lake what a beautiful view at the window there. We all had very good Bloody Mary's as well. Walleye is what we fished for at the second lake and they don’t usually bite till the sun starts setting….so from before 3 to after 4 we didn’t catch fish…but rather watched the others as they played football to help keep warm and pass time. It got windy at the second lake, with the wind it felt much colder, but most of us stayed warm enough. Clayton got the coldest, but in the black Ice Cube (tent) they had a propane heater, and chairs in there warmed you up rather quickly.

Then after the sun set, we fished till we could barely see and that is when we starting really catching them, but then soon after headed to the hotel. Changed relaxed for 1 hour and then went to Dinner with Mark and Donna. After dinner we went to a casino and played till midnight. I only spent 20 bucks! Found two machines right next to each other which let me play all evening long on a $20 dollar bill. Clayton played 21 all night, lost about $20 or so.

Sunday morning we went to breakfast; then to an antique auction. We only stayed for 2 hours; one hour to look over everything; then the first hour of them doing to auctioning. Amazing how much money people will spend for things I’d think about tossing in the garbage or giving away. But it was fun and interesting. We didn’t bid on anything.

Then we stopped by a Camille’s Sidewalk Café, I haven't been to one of those since we moved here, almost a year. Boy I have missed that place. It’s about 40 mins away from Stevens Point, and near where Donna lives so we’ll be back I’m sure. We left that weekend with two walleye in a cooler filled with snow. Sunday evening, we watched three video's on you tube on how to fillet walleye and Clayton did a pretty darn good job at it. We marinaded them for 30 min's in a Greek Dressing/Marinade; then he broiled them! Darn Tootin Good I have to say....we some really good mashed potatoes we had a wonderful meal. I want to go catch more....

The morning we drove up North to the Lakes the trees full really frosty and all white; I haven't seen that here yet, and I tried to capture it on camera by snapping out the window while driving. 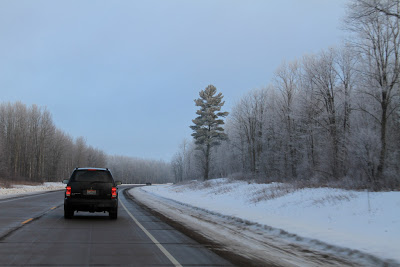 With the ice auger, you have to drill the holes.... 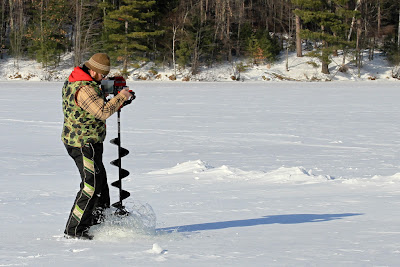 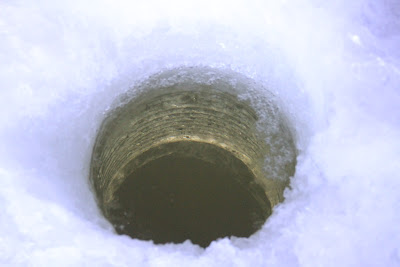 then you bait and set the Tip Up 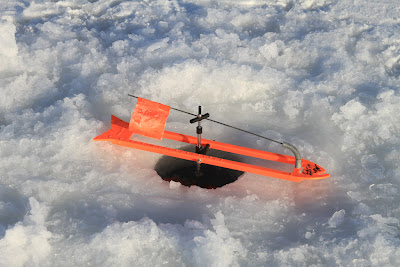 Then you wait for the flag to pop up! and run over to it; usually all six of us ran to get a better view of what was being pulled up. First you watch the spinner...if it's spinning the fish is swimming....Pulling the tip up out carefully and then you grab the string, jerk it to set the hook
and start pulling up the string by hand till you pull the fish up the hole 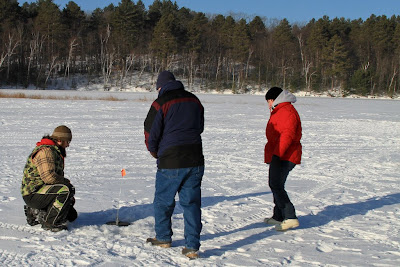 This is the one that measured 24 inches...it went back down the hole. 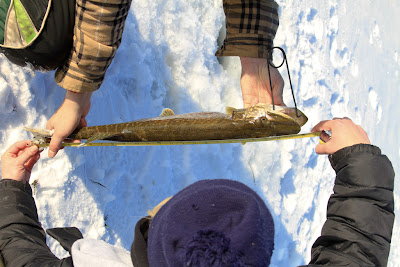 but not until I had taken a proud photo; these first fish images are of Northern Pike 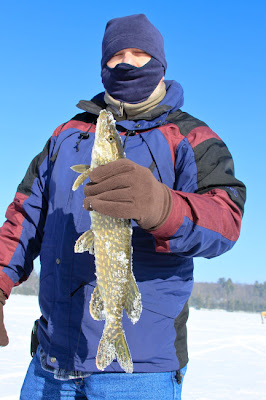 Then I had caught one too, by first one was really small, this second was a nice size but not big enough to keep so this one went back too. 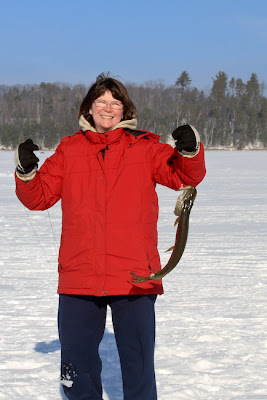 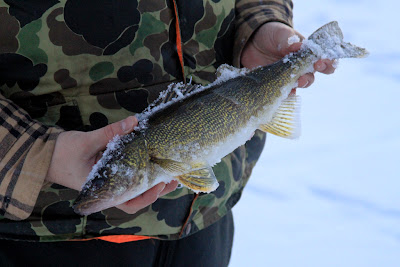 It was a bit colder here; much more wind and that makes it so much colder.
Temp was about 33-34 degrees and sunny all day; if it had not been so windy it would have been almost warm out.
. 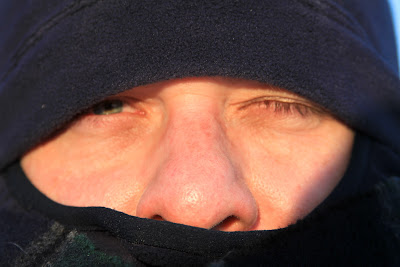 Second lake we took two vehicles out on the ice; but after unpacking and setting up the holes and tip ups decided it might be better to move them back up on land. 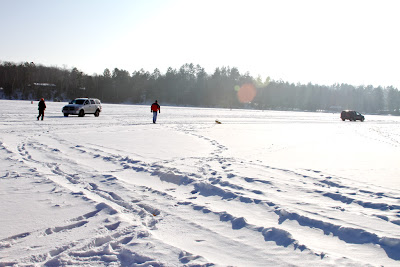 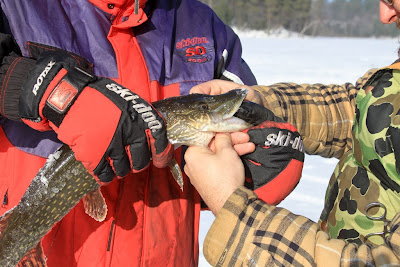 I'm excited, we have an opportunity to actually catch a fish (hopefully several) this weekend. Wish us luck and come Sunday evening I hope to have lots of fun images to share with lots of fish stung on a string, or at least one edible sized fish we can be proud of. Or a great story of the one that got away! or something!!! 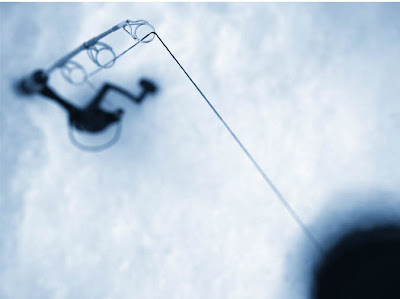 The Day After, the 'Blue Moon'

Hi Leenie, I finally got a clear sky and the opportunity to try out your settings. The ones you posted on November 11, 2009 with instructions on how to shoot the full moon! Well I almost used your exact setting, but I had to tweak them ever so slightly to get this shot. Seems it is almost sitting in the same position as when you shot yours. Anyhow, I wanted to thank you for posting that blog as i found it most useful.
.
My settings were: f/5.6, ISO - 100 at 1/500th of a sec. focal length 300MM
This image is of course cropped into and adjusted even more in photoshop to pick up a little more detail (I darkened it a bit more)
. 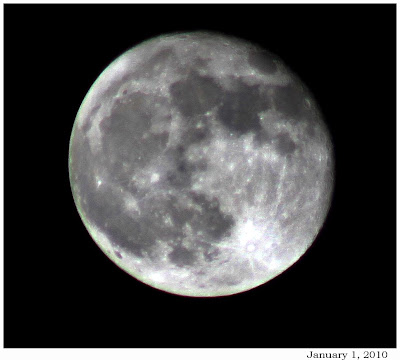 How will you say it now?
Two Thousound Ten?
or
Twenty Ten? 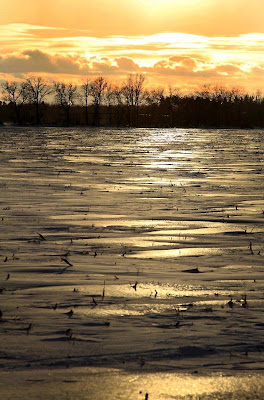